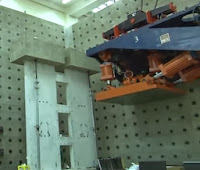 The primary objective of the NEES@Illinois facility is to create a physical-analytical simulation environment whereby multi-axial, full-scale structure-foundation-soil systems can be subjected to complex loading and boundary conditions representing earthquake ground motion. Actions and responses are captured by state-of-the-art instrumentation and are processed and visualized using software developed by the site.
The major physical components of the facility are the reaction structure and the loading and boundary condition boxes, or LBCBs. Each LBCB is a self-reacting assembly of actuators, swivel joints, and control software capable of imposing any combination of six actions (forces and moments) and six deformations (displacements and rotations) on specimens connected to the loading platforms of the LBCBs. The site has three (3) large LBCBs, which can be used separately or in combination. When used together the LBCBs can be controlled independently, or they can be controlled to act as a single LBCB with increased load capacity. One of the key attributes of the MUST-SIM facility is that the LBCBs may be reconfigured to accommodate a vast array of testing needs. Examples of past tests and specifications of the test equipment will be presented during the webinar.

In addition to the full-scale facility, the NEES@Illinois site has a fully-operational, 1/5th-scale version of the MUST-SIM laboratory. This facility provides a realistic pre-test environment and serves as an education and outreach facility, but has also proven to be a worthy research facility in its own right.

Beyond the hardware aspects of the laboratory, NEES@Illinois has also developed the control systems and data acquisition systems used in the MUST-SIM. These systems will be covered in detail.