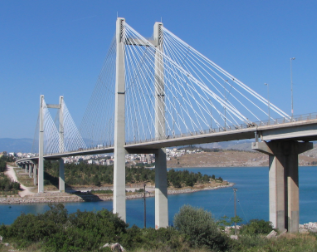 The 395m long Evripos bridge in central Greece, connects the island of Evia to the mainland. An accelerometer array of 43 triaxial sensors has been monitoring both the free-field excitation and the response of the superstructure in a series of seismic events since 1994. This paper focuses on the characteristics of the spatially variable, earthquake ground motions recorded during two seismic events (1999 & 2013) and the corresponding bridge response. A model updating is performed to match the numerically predicted with the measured bridge response. Then, the nature of the recorded ground motions is studied and the incoherency patterns of the seismic waves are compared with empirical or semi-empirical models. It is observed that the loss of coherency at the site is isotropic. It is also documented, for the first time based on actual free-field and on-structure recordings, that the asynchronous excitation of a bridge excited higher modes of vibration while suppressing the oscillation on its fundamental frequency. The latter is in line with analytical predictions and is believed to be a key finding in understanding the nature of spatially variable earthquake ground motion and predicting its potential impact on the seismic response of bridges.