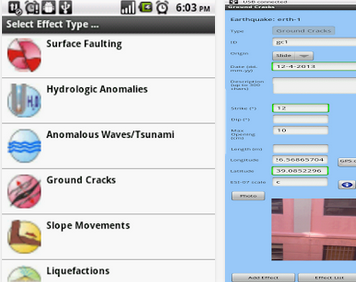 Earthquake Geo Survey is an application that can be used by earth-scientists and engineers during field surveys in order to report the earthquake-induced environmental effects. The app has been designed based on the EEE form, proposed by the INQUA TERPRO Focus Area on Paleoseismology and Active Tectonics, for reporting earthquake-induced deformations and processing the collected data at the end of a post-earthquake reconnaissance field survey. As an outcome, the earthquake environmental effects can be documented and the macroseismic intensity will be evaluated based on the Environmental Seismic Intensity-2007 (ESI-07) scale. The post-earthquake report can be exported as kmz file and consequently uploaded to GIS environment.