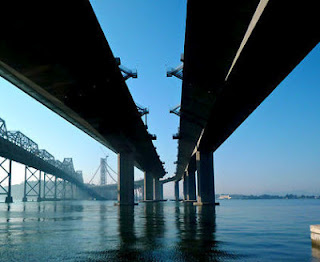 SAN FRANCISCO — Venture deep inside the new skyway of the San Francisco-Oakland Bay Bridge, and it becomes clear that the bridge’s engineers have planned for the long term.

At intervals inside the elevated roadway’s box girders — which have the closed-in feel of a submarine, if a submarine were made of concrete — are anchor blocks, called deadmen, cast into the structure. They are meant to be used decades from now, perhaps in the next century, when in their old age the concrete girders will start to sag. By running cables from deadman to deadman and tightening them, workers will be able to restore the girders to their original alignment.
The deadmen are one sign that the new eastern span of the Bay Bridge, which includes the skyway and a unique suspension bridge, is meant to last at least 150 years after its expected opening in 2013. (The existing eastern bridge, which is still in use, will then be torn down.)
But to make it to the 22nd century, the new span may at some point have to survive a major earthquake, like the one that destroyed much of San Francisco in 1906 or the one that partly severed the Bay Bridge in 1989. With two faults nearby that are capable of producing such large quakes, survival is no simple matter.
Say what you want about the project — and as the construction timeline has lengthened past a decade and costs have soared over $6 billion, plenty has been said — keeping the bridge intact in an earthquake has always been the engineers’ chief goal.
And to meet that goal, they are going with the flow: designing flexible structures in which any potential damage would be limited to specific elements.
“We wanted to make this bridge flexible so that when the earthquake comes in, the flexibility of the system is such that it basically rides the earthquake,” said its lead designer, Marwan Nader, a vice president at the engineering firm T. Y. Lin International.
That contrasts with another potential approach: making the bridge structures large enough, and rigid enough, to resist movement. “Massive and stiff structures would look absolutely ugly and be very, very expensive,” said Frieder Seible, dean of the Jacobs School of Engineering at the University of California, San Diego, who tested many elements of the bridge design.
That design includes a 525-foot-tall suspension bridge tower made up of four steel shafts that should sway in a major earthquake, up to about five feet at the top. But the brunt of the force would be absorbed by connecting plates between the shafts, called shear links.
The bridge’s concrete piers are designed to sway as well, limiting damage to areas with extra steel reinforcing. And at joints along the entire span there are 60-foot sliding steel tubes, called hinge pipe beams, with sacrificial sections of weaker steel that should help spare the rest of the structure as it moves in a quake.
“At the seismic displacement that we anticipate, there will be damage,” Mr. Nader said. “But the damage is repairable and the bridge can be serviceable with no problems.”
Emergency vehicles and personnel, at the least, should be able to use the bridge within hours of a major earthquake, after crews inspect the structure and make temporary fixes, like placing steel plates over certain joints. Given that the Bay Area’s two major airports would be expected to be out of service after such a disaster, this bridge and the Benicia-Martinez Bridge, another seismically secure span about 20 miles to the northeast, would be “lifeline” structures to bring assistance to the stricken region from an Air Force base inland, said Bart Ney, a spokesman for the California Department of Transportation.
It was an earthquake that made this replacement span, which runs for 2.2 miles between Oakland and Yerba Buena Island in the middle of San Francisco Bay, necessary. The Loma Prieta quake of 1989, the first to occur along the San Andreas fault zone since the 1906 disaster, caused part of the existing steel-truss span to collapse, killing a motorist. The bridge was closed for a month. That quake, with a magnitude of 6.9, caused strong shaking that lasted about 15 seconds and movement far greater than the 1930s-vintage bridge had been designed to handle.