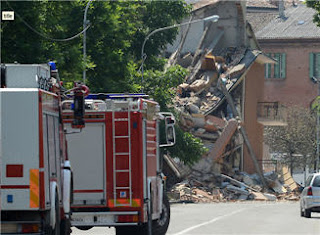 MIRANDOLA, Italy (AP) — A powerful earthquake killed at least 15 people as it rocked a swath of northern Italy on Tuesday. Factories and churches collapsed, dealing another blow to a region where thousands are still homeless after a stronger quake just nine days ago.
The 5.8 magnitude quake added to the misery being felt in the Emilia Romagna region of towns north of Bologna, one of Italy’s most agriculturally and industrial protective areas.
The quake hit just after 9:00 a.m. with an epicenter 40 kilometers (25 miles) northwest of Bologna, according to the U.S. Geological Survey — just a handful of (miles) kilometers away from where the deadly May 20 quake was centered.
The quake was felt from Piedmont in northwestern Italy to Venice in the northeast and as far north as Austria. It was followed by many aftershocks, some registering more than 5.0 in magnitude.